Little portrait of me. Photoshop “oil painting” of  handsome me and the lupines.
Pappy Snack Pockets, is that a biscuit you’ve got there?
(All photos and digital paintings on Ranger’s blog by Elise Huffman.)

If you go to Fort Ord National Monument in Monterey/Salinas, California remember to take your dog. He/she can be there. Yay! Remember to take along some water and a camera (with charged batteries) to capture and refresh your memories.

A picnic is also a good idea. Be extravagant. Buy handcrafted bread, boutique peppered jerky, and local wine,  some vegetables, maybe an avocado. Bring iced tea. A cookie. Bring some dog biscuits and some warm, smelly Camembert to share with your dog.

With 86 miles of trails and 7,200 acres this park is huge. But not many trees for shade. As a corgi, forced by nature to wear a black fur coat at all times, this is a consideration. If possible go when there’s some fog to cool things down, or a little breeze, or bring a little stroller with a sun umbrella for the corgi. 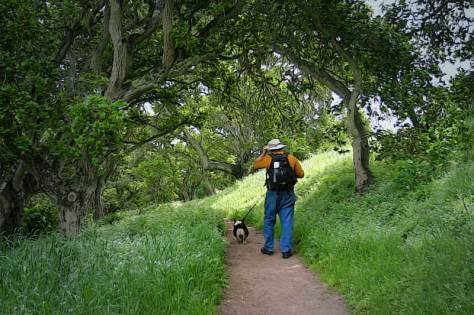 Under the California Oaks at Fort Ord, some welcome shade.

Attention humans!: 1. Don’t walk too fast. 2. Don’t jerk on the leash. 3. Stop for overheated corgi breaks. This may require waiting while your corgi digs a shallow hole to lie in. Be patient. You need a rest too, especially after that wine you had with your picnic.

“Take only memories, (and photos and of course those dog poo bags)
Leave only footprints. (and wee.)”—Ranger the Corgi.

Lupines on the hillside in the foreground.

There are millions of lupines here. Lupines smell wonderful and sweet. A little too sweet for my liking. Far better sprinkled with a little corgi pee. 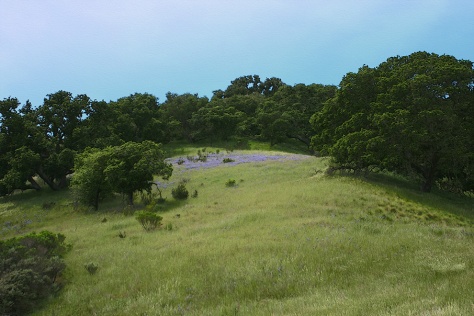 Dusting of lupines in the distance. Yes, it’s Photoshopped. When the photos aren’t so great and you only have a few, it’s time for Photoshop.

When horses pass by stand off to the side. Dogs should sit so they don’t frighten the horses. Humans should not sit or crouch, it frightens the horses. Horses are easily frightened so we have to make accommodations for them. Don’t get too enthusiastic! Woof! 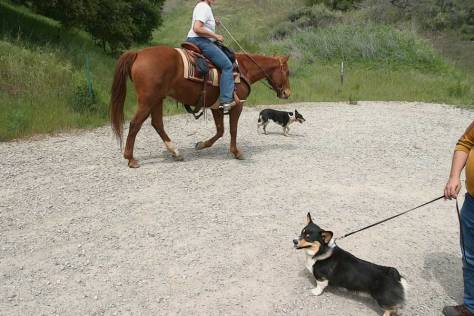 More horses. I forgot to sit while they passed. But at least I didn’t bark at them. 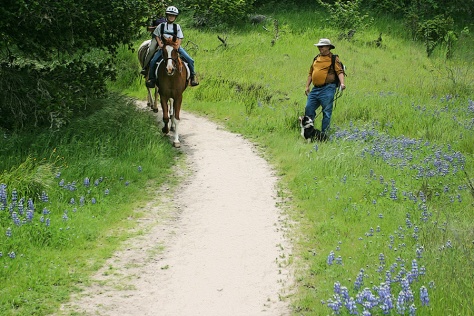 When horses pass you on a trail sit down and wait. They’re nervous ninnies.
Photoshop painting by Elise. 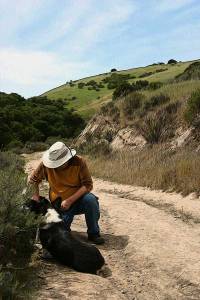 Always bring water for your dog. Be patient while he sits in the shade to catch his breath.

We were at the top of a hill (sheep in the distance) and there were four bars on the cell phone! This was supposedly some kind of miracle. Elise called her sister to share “Wow, wish you were here! The cell phone coverage is amazing!”

We walked on a narrow trail over grassland hills, lupine, through oak woodlands and chaparral. We saw a snake. We saw a dead star-nosed mole. I sniffed at him and was just about to roll on him when my humans jerked me away. Dang, why are they always doing that!?

We left, after hours of hiking, south on Hwy 68. Near Toro Park nature enthusiasts were snapping photos of a pasture full of purple lupines. They didn’t even have to get out of their cars.  We had no camera, so we could take only memories.

“The digital camera is a great invention because it allows us to reminisce. Instantly.”—Demetri Martin