Woof! Not good! Alert! Very messy people left heaps of garbage on our favorite beach. Yesterday we worked with Save Our Shores to help clean up the debris. It was like a treasure hunt for icky things and I did kind of get into it! It was fun (kind of). Of course, it’s more fun NOT to have to clean up the beach. It’s more fun when the beach is already clean. Then you can run on the beach, play, chase other dogs, dig a hole, roll on a dead seagull, maybe pee on drift wood. So it wasn’t the best best fun, but it was fun compared lying under a desk or driving too many miles in the back seat of a car. The humans seemed to get some satisfaction out of it, so that was good, and I was happy with them for making the place look nice again.

No one likes a dirty beach. Even the people who make a dirty beach don’t like a dirty beach. That’s ironic…or is it? Even slobs must be disappointed when they get to the beach and it’s covered with garbage. Hey, this place used to be nice!

Ranger and his pals help with a monthly clean up at Davenport Beach.

Here is a photo of me (the handsome corgi on the lower right) with Jeff and Elise, and a guy and a dog, after the clean up. Wait a minute here’s a news flash from Kait: The “guy” on the left is Haig (a human and Master of Extreme Beach Cleanups. He’s there every weekend!!!) and Oden is the dog with his nose in the garbage. He is the unoffical Extreme Cleanup mascot, so I guess I won’t be. Oden is cool. My hackles didn’t go up at all around him. So, he’s okay with me. Save Our Shores does a weekly Extreme Cleanup of Davenport Main Beach from 9-11 every Sunday through the summer.  Kait says that “If we didn’t do a weekly cleanup, we’d be in some real trouble trying to remove what I can only imagine would be 1000+ pounds of trash..” Yup, I can only carry about a pound of hot dogs, so that means we’ll need more help…more people…and more dogs to get it done.

Kait M. took this nice photo. That was after she helped pick up garbage. Then she organized all the trash and recyclables into different bags. Then took a photo. She’s so talented!

These are some of the things we found: beer cans and bottles, old salsa, tuperware, starbucks coffee cups, shredded or clumpy tissue paper, bottles of unfinished alcohol (bad flavors) “Red Hot Cinnamon Whiskey,” and “Blueberry Vodka” (blue). I guess the flavors were so bad that the people who chose them couldn’t even drink them. There was a axe handle and a plastic shovel; a tube of something from Victoria’s Secret called “Sexy Kim” and a homeless person’s blanket. There was a digital music recording for a greeting card (Copacabana? Probably had a dancing hamster on it). There was a mysterious zip lock bag with “Destiny” written on it. It was empty. There was a red rose; a green piece of chewing gum; a broken chair, a package of uneaten cream cheese (dang!); and more cigarette butts than you could shake a stick at (not that anyone tried). There was even a hotdog (I wanted to eat it but the humans snatched it away. They can be very greedy.)

This photo does not show how much work it was to clean up the beach. It doesn’t let you know how it smelled: stinky. All the trash and recycling weighted a total of 268 pounds! Yikes! There were 83 pounds of trash and 187 pounds of recycling. (Wait a minute, someone needs to check the math.) That makes 270 pounds. Don’t look at me. I can’t actually count up to more than “some” or “many.”

Thank you to anyone who ever helped clean up a beach ever in their life. And  Grrrr!!!Grrrr!!! ARfff!” to those who leave the trash. If you ever want to help clean up a beach just do it. Take a garbage bag to the beach and put trash in it. It’s easy. If you want to have company while you do it check out Save Our Shores. You can donate and/or volunteer. You can put that little paper token thing in the slot for them at New Leaf Market or go here and find out more: http://saveourshores.org/

Of course right after this photo was taken it was time to haul that stuff up the hill to the parking lot, to the garbage cans. Our stuff couldn’t even fit in a garbage can…well I’m sure that it was taken away somehow.

So here’s my question: What happens next? Where does that trash go? How do you throw away a garbage can*? 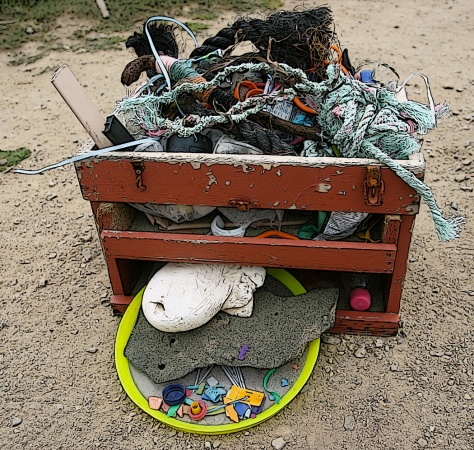 On a wind swept Point Reyes beach, years ago, we collected this flotsam. Most of the ickier stuff was not photographed but went straight into the dumpster.

*”how do you throw away a trash can”—Steven Wright

One thought on “Cleaning Up the Beach”