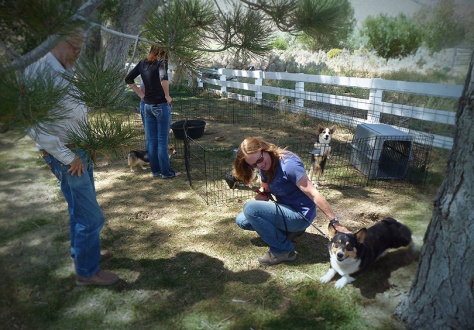 I couldn’t believe it, but why not? Stranger things have happened, I was reunited with my original family! That’s my old friend Jim on the left and Elise in the middle. I’m the cute one on the right.

It took a while to find out where I came from. Elise had gotten me in a sort of round-about way from a cowboy at the horse barn. She had seen another corgi puppy that guy brought out to the stables and wanted him, but he went to another girl. Cowboy Mark said “There’s another corgi out in Salinas. He’s more of a man dog.” Elise really didn’t know what that meant. A dog for a man? or a dog like a man? or a dog-like man?  She still doesn’t know, except that it turned out to be me. Then she learned that I was 1.5 years old and that I had been bought for breeding purposes and that I supposedly hadn’t been interested in “the ladies.” I don’t really know how to explain about that, except to say that maybe those ladies just weren’t my type. Mark placed the make-shift collar/leash, a blue hay-bailing string, in Elise’s hand and we’ve been inseparable ever since.

Elise called and talked to the, somewhat illusive, breeder woman in Salinas, a friend of the cowboy. Elise asked “please, I really want his papers and vet records,” and “what can you tell me about him?” and “where did you get him?” She asked lots of questions about me. She learned that I was originally from Antelope Valley in Nevada, near Lake Topaz. The lady said that her original owner was sad when she took me from her ranch. I was sad too. She shared her stories: that I always stayed close to the house (right on the doorstep) and also that I liked one of her Rat Terriers, but none of her corgi girls. She said once the dogs, me included, “got into it” with some wild boar. She said that I was called “Ranger” or “Batman” and that she liked to name dogs after cars so she named me Ranger. Her other dogs were Shelby, Porche, Chevy, Cooper,…Beemer? Edsel? Aspire?

So, Elise slowly got all my papers together, my puppy diary, AKC registration papers, birth certificate, health records. Mark said “I think he even has a pilot’s license in there” as he handed her the big envelope. 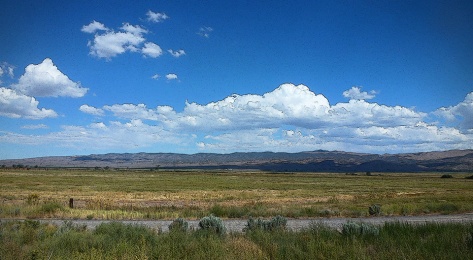 It’s the place I knew so well, Antelope Valley, Nevada

My rabies tag was still missing. So Elise called my original breeder, finding Helen’s name in the paperwork, to see if she had one of the tags. Helen was so nice and shared lots of stories about how we used to go swim in the creek, how I used to chase the sheep and horses in the pasture. She told Elise that I liked to go vole hunting too. And she said that we could visit someday and meet my parents. She said I was named “Topaz Ranger” because I was born near Lake Topaz and I liked to wander off all over the property. Sometimes they didn’t know where I was, but whenever they called I’d be there right away. 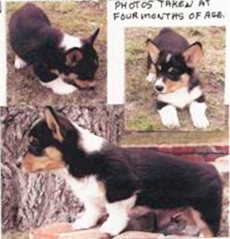 Here’s a little collage of me that Helen shared with Elise, so she could see what I looked like when I was a puppy.

So, this summer we went to Antelope Valley near Lake Topaz. First we went camping at Blue Lakes, and canoeing. I enjoyed running like a nut on the shores of the lake. I liked the hiking. I liked sleeping in the tent. On the third morning by the lake we made our way to Nevada through Woodfords, on the east side of the Sierras. It’s a tiny town Elise and Jeff like. My Aunt Linda once said “that’s not a town. That’s just a place on the side of the road.” Well, it turns out that it’s a place with 144 people in it…is that a town? You guys can figure that out. I’ll get back to my story. 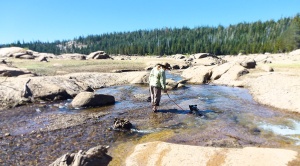 Here I am swimming at Blue Lakes. Later I was freed from my leash and ran around in the muddy shore….good times!

There was a lot of  boring driving, hot and boring driving, to get to Antelope Valley. But when we got there I can say that it smelled familiar. It took a long time to get there because of bad map reading by the humans (we ended up in an Washoe Indian reservation) and road construction delays. But then we arrived miraculously back at my first home. Valentine, my sister, met us at the gate. She seemed pretty nice and let me into the yard. I’d never met her, nor her me, so we did the usual “hello sniffing.” 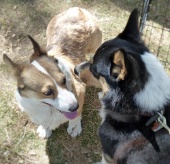 There was a lot of commotion, other people were visiting at the same time we were. They were looking at puppies! I didn’t have too much interest in them. I wanted to see my mom, and my old friends the McFarlands (who were somehow more than friends) and that Golden Retriever, What’s His Name. I think it was  “Sam” or “Fred.” I knew him as “my buddy,” and I used to hang out with him. 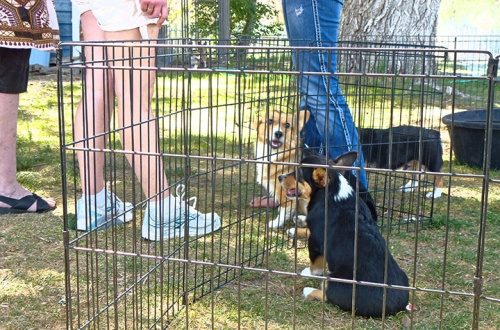 That’s may dad amongst the human’s legs. That’s the puppy that looked so much like me (front, right.)

There was a pen with a couple of my very cute relatives, cousins or brothers, not sure which. One looked exactly like me when I was little, and like me he was cool, shy, handsome and smart (super-smart probably). He rolled on his back for the humans to give him a tummy rub. The other was outgoing, handsome, energetic, and full of himself. He climbed up on the fencing. Two very different dogs, both loaded with good qualities! It’s hard to find a dog as special as I am, but these puppies had already tied little love ropes around the hearts of their visitors. They already had new homes. 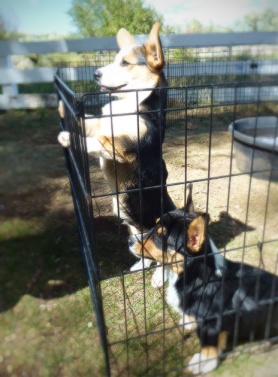 The two puppies waiting for their new homes. One of them was named “Moose,” but which one? I’m not very good with names.

I sniffed and sniffed all the good smells of that yard I once knew so well. Memories flashed through my head of hot, sweet smelling summers, snow cold winters, horse ankles, pastures and creeks, and the adventures I’d had with my family there. I made a special memory postcard in my brain of all the smells, sights, and the life of that day. I marked my territory (with little yellow PostIt notes) and scraped at the ground with my back paws to let everyone know I was there. Then I stood next to Helen and sniffed her hand and she scratched the back of my neck.  She said “Ranger, you’re so very handsome.” 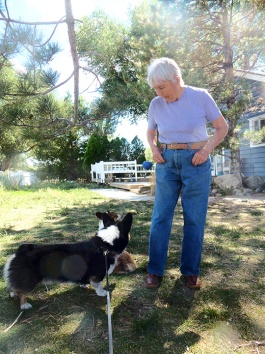 My dad, the proud and very friendly and popular “Cadfael”

My mom, the beautiful Victoria

Then, the came the best part of all: I saw my mom! Her name is “Victoria.” She is so beautiful. The most beautiful dog you’ll ever see. All I had of her was a little “dog-earred” picture, not the best quality, that I kept in my crate, along with a picture of my dad, my baby pics, and an old blanket that finally smells just like me. (Elise, if you’re reading this, please don’t wash my blanket.)

My mom was in her pen, because she was in heat. She smelled super good, and I recognized her “Mom! Mom! It’s me, your most handsome son! Your Prodigal Son!” She said  “hmmm, well, I don’t know. You look a little bit familiar.” “No, really, it’s me, your most wonderful son!” She said “well, it’s nice to see you handsome corgi, whoever you are.” We looked at each other and I showed her how I could shred the ground with my back paws, puff out my chest, and pee on things. 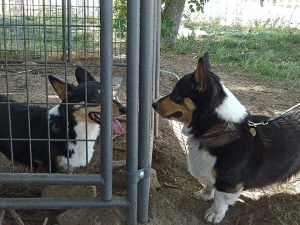 I think I impressed her even if she hadn’t remembered me. My mom is THE most BEAUTIFUL corgi on the planet. That might be one reason I’m not interested in other girls. I have extremely high standards. If I can’t find a girl as wonderful as my mom then just forget it!

Before I left I had a chance to visit with the old Golden Retriever, What’s His Name, really “what’s his name?” I enjoyed sniffing him, as I always have. My sister, Valentine, decided that it was time for me to go and barked at me “scoot!” and “get out of here” and “smell you later!”

Elise and Jeff put me in the car.  My dad, the famous “Cadfael” came out into the yard to meet them. He’s super friendly and went around to all the people, all the guests and smelled them and said “hi, welcome to my home.” He had a lot of presence and obviously was loved a lot by Helen and Jim. Then he smelled where I had marked. He saw where I had shredded the ground. “Hey, wait a minute!” he said, “Who’s this I smell?!” It was me of course. My dad started running around looking for the guy who marked up the yard, me. Then he went to his girl, Victoria. He smiled to see that she was there and I wasn’t. 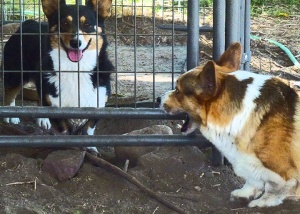 Victoria and Cadfael, my parents.

Then he went to the front gate looking for me. “I smell you little boy corgi,” he said, “and I better not smell you around here again.” He wanted to kick my butt. But, I was in the car. (My dad and I have a complicated and competitive relationship. However there are a few things we have in common: an appreciation for a really good, comfortable bed, a jovial attitude about the humans, and of course, we both love my mom.)

We drove away from that beautiful valley of my youth. I said “thank you good humans, for letting me visit those nice people and my mom!” I smiled as much as I could so they’d know how happy I was. So very, very happy! 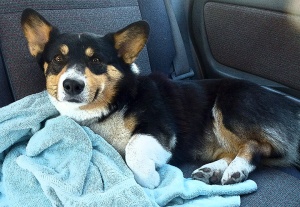 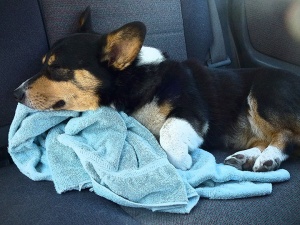 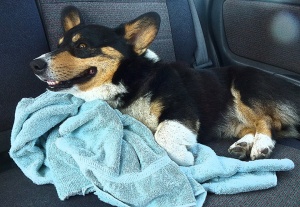 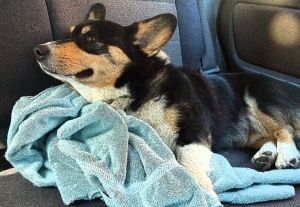 I hope we can go back some day. It’s good to have a connection with your roots. Maybe next time we go there’ll be a corgi that will come home with us…you never know!

I’ve found that when I smile the world smiles with me. I hope you enjoy my happiness in these photos. I’m smiling, hope you are too!—Ranger the Corgi

p.s. remember you can click on the pictures and they’ll get bigger.

12 thoughts on “Searching and Finding”

Leave a Reply to Ranger the Corgi Cancel reply